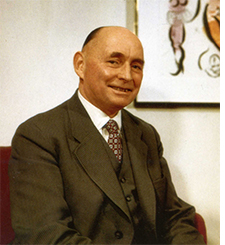 Manfred Dunkel initiated the GAEDE Foundation in 1984 and laid the basis for the foundation's assets.

Manfred Dunkel, born on 27.11.1898 in Bremen, died 26.04.1985 in Cologne, took over the Cologne-based company E. Leybolds' successors, a special factory for high- vacuum pumps and scientific teaching materials, from his father-in-law Alfred Schmidt in 1931. Using the vacuum technology developed by W. Gaede, university professor in Karlsruhe, he succeeded in expanding the process technology in the field of high-vacuum technology. In 1952 he founded the subsidiary Leybold-Hochvakuumanlagen GmbH. In 1967, under his direction, the two companies merged with the vacuum department of Heraeus, Hanau, to form the Leybold Heraeus GmbH&Co.

In 1968 he retired into private life. Dunkel held numerous honorary positions and received numerous awards. From 1964-1966 he was chairman of the employers' association of the metal industry in Cologne, from 1950-1969 a member of the board of the association of German precision-mechanical and optical industry e.V. as well as lay judge, commercial and employment judge in Cologne.*